Acids and Bases in Organic Chemistry

Acidity and Basicity in O-Chem

Acids and Bases in Organic Chemistry

Acids and Bases and their Relative Strengths

Organic chemists rely on pKa tables to consider and compare acidity and, by extension, basicity.  If one understands either side of the coin very well, one will understand the other. Without a lot of detail here about it, this is simply due to the inverse relationship between the strength of an acid and that of its conjugate base and vice versa. This is something you should remember as review material.

Some figures estimate that 97% of the subject is acid-base chemistry. A year ago, you were concerned with equilibrium in general chemistry. And most people at the introductory “review” or “re-hash” for Organic Chemistry roll their eyes or fail to take the information about acids and bases seriously. They assume they’ve heard it before. Well, yes and no. What you learned back then were different concepts. For example, how the hydrogen ion and/or hydroxide ion concentrations of a solution determine pH, pOH, procedures like titrations, use of indicators, performing serial dilutions etc.

That’s in the past. You’ll do none of these things in organic chemistry; probably not even in organic lab.

What hasn’t been considered, and is something quite different and crucial to organic chemistry is the idea of acidity and basicity as inherent properties of compounds based on their shape, size and electronic nature (or ‘stereoelectronics‘).

To take this topic for granted at the beginning, which is easy to do pretending that name recognition equals understanding, is among the deadliest mistakes leading to total or sufficiently mind-blowing confusion and possibly aneurysms down the road.

Do not pass the chapter on Acids and Bases without understanding it!

Can you do all the problems in that chapter? If you can’t, study that chapter again even though new topics commence. Do so until you understand acidity as possible. That’s all your focus will be on and will need to consider most often on your first exam. You may notice, the chapter on acids and bases, is the longest and has the most problems in it compared to other textbook chapters. There is a good reason for this.

Textbooks however, rarely, if ever, cover acids and bases sufficiently. Consider it your job to go beyond the book until you can explain what it is to yourself with zero ambiguity. It will serve you well later. Don’t worry, there are no calculations, and those that you’ll do, if ever, are trivial. The most critical number here is the pKa but you will not necessarily calculate it unless other data is provided: (a Ka is a Keq or equilibrium constant for an acid-base reaction in [55.5M] water). The concentration of water in pure water.

You don’t care what the pH is for the most part in class (in lab, occasionally), so don’t even worry about pH and never confuse the two.  Until you reach the section on amino acids at the end of semester II if you cover it, you’ll not be using it unless you are taking a hybrid organic/biochemistry course. This combines the ideas of pH and pKa into something called the pI (isoelectronic point) using the familiar Henderson-Hasselbach equation. (Neither the Henderson-Hasselbalch equation nor the Gibb’s Free energy equation use the common log (the log base ‘e‘ or natural logarithm (ln)).

What is the Significance of pKa?

The pKa of a given compound (every compound which can donate a proton has one) is a sort of numerical index: a unitless reference. Understand that the lower the pKa, (the smaller it is) the stronger is the acid in question. The opposite is also true. The more willing a compound to allow a base to remove or accept it is the concept of acidity. The pKa can be as low as -11. It can be as high as ~50; a difference of 61 orders of magnitude (pKa  tables vary substantially, and also depend on the solvent environment it is measured in).

This difference does not mean that the strongest acid is 61 times better at donating a proton (a positively-charged, H+ ion), than is the weakest acid. Since acid-dissociation constants (Ka ‘s) are based on ratios of trillions of species relative to trillions of others,

Furthermore, and most importantly:

Ka can be an infinitesimally small or unimaginably large. Scientific notation or common logarithms obviate the need for too many decimals. So like the decibel, Richter, and other scales, large magnitude differences of some measurable quantity are simplified by taking the negative log. The common or base 10 (log10) logarithmic scale is used here and the difference between the strongest and weakest acid is a 1061-fold difference. Such a number (a “1” with 61 zeroes behind it or in scientific notation: 1 x 1061) describes a difference in magnitude I dare say is inconceivably large. (And you thought a mole was a lot of atoms…).  1 x 1061 is estimated to be equivalent to the number of stars in the entire universe. 1081, an even more astounding difference, is estimated to be the total number of individual particles in the universe.

There’ve been several definitions of acids and bases through history, only two are now useful.

The Arrhenius definition, for example, is no longer useful though it sounds perfectly reasonable (from a Brønsted mindset).

Arrhenius Acid: a substance that produces [H+] in aqueous solution.

Arrhenius Base: a substance that produces [OH–] in aqueous solution.

When discussing Acids and Bases, What Definition Are We Talking About?

The *Brønsted-Lowry Definition of Acids and Bases:

Unless stated otherwise, assume we are operating under the Brønsted definition. A proton (H+) is transferred from a donor (the acid (H-A) to an acceptor (the base (B:).

The carboxylic acids, phenols etc. are

<Think of Na+–OH, hydroxide and the conjugate bases of alcohols: alkoxides ( –OR).>

Ammonia and the organic amines are weak bases and neutral, but still behave predominantly as bases using a lone pair of electrons.

∴ Unless specified explicitly, when someone refers to an acid/base reaction in organic chemistry, we’re talking Brønsted-Lowry:

Despite the prevalence and usefulness of pka tables, you don’t need a table or actual numerical values to determine relative acidity. Relative, not absolute, is what matters in your answers.

You may not have realized this until now:

The PERIODIC TABLE  is sufficiently useful as a pKa TABLE.

(Large tables of hundreds of compounds are references when more precise experimental values are needed).

If we place hydrogen atoms on all the non-metal elements that we are studying, this makes them all potential Brønsted Acids (proton donors). The protons in blue are the acidic H atoms we are discussing. 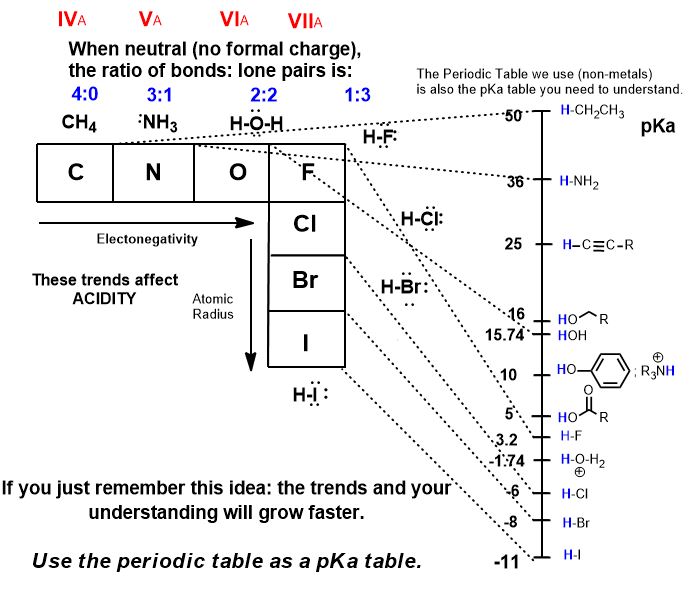 Lewis acidity and basicity will pop up occasionally and when they do, they are always specified as such: “Lewis Acids” and “Lewis Bases” which are often used as catalysts to speed up reactions and/or alter the mechanism. If the term “Lewis” is left out, assume you’re discussing the Bronsted definition.

Where did Lewis Acids and Bases disappear to? Nowhere. We just think differently about them.

In fact, Lewis Acids and Bases hardly disappear. At some point in the semester, without you ever noticing, Lewis Acids and Bases began to be called something else—These terms are more succinct, more practical and apply especially when the Lewis acid or base is made of carbon (which is often what we care about most).

Do you know what the organic chemistry terms for Lewis Acids and Lewis Bases are?

Take a wild guess. If you’re unable to think of it at this moment, go directly to  Unspoken Rules In Organic Chemistry for the explanation.

0 responses on "Acids and Bases in Organic Chemistry"