Methane for example is reduced. It’s surrounded by electrons because the only thing attached to it is hydrogen. Hydrogen (2.1) has about the same electronegativity as carbon (2.5). We are concerned with covalent bonds. This is a nonpolar bond.

When carbon is attached to oxygen on the other hand, the amount of electron density (not a whole electron) is decreased or lost. This is oxidation. The most oxidized forms of carbon have their electrons far from the nucleus surrounding an atom more electronegative than it. The carbon in CCl4 or carbon tetrachloride is highly oxidized because its 4 electrons are closer to chlorine than itself. Therefore it and carbon dioxide, carbon monoxide and so on, with many polar covalent bonds are highly oxidized.

When carbon is surrounded by hydrogen, the amount of electron density around carbon is highest (Silicon adds more than hydrogen but that’s another story). Reduction therefore, is any reaction where carbon gains hydrogen. The gain in hydrogen is and must be an exchange for a similarly electronegative atom (read: hydrogen) than carbon and is called a reduction reaction.

If we take a single carbon through the limits of reduction and oxidation, it would look like the following:

Since carbon keeps more of its electron density to the left, it is more reduced. Conversely, it loses much to oxygen on the right side so it is oxidized. It does not have to be oxygen for a chemical change to be an oxidation. Any element that replaces hydrogen and is more electronegative than carbon is an oxidation. Any reaction that removes an bond to a more electronegative atom in exchange for hydrogen is a reduction.

Catalytic Hydrogenation: Which is it?

Since each carbon gains a hydrogen atom and the hydrogen comes from one face of a palladium (metal) surface, they will almost always come from the same direction (on paper that is) and each carbon also gains a bond to a less electronegative atom (sp3 carbon from an sp2 carbon). This is a reduction.

It’s also a favorite reaction because it is easily memorized. Make no mistake however, this is a flash card reaction. The others are not this simple. The point is that there’s no mechanism to draw (no arrows to push) so people who are new love it. This reaction can be learned by a junior high school student, literally.

Halogenation: Which is it? 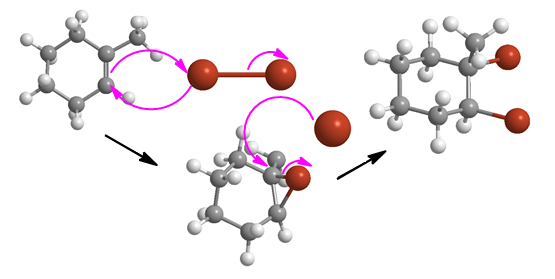 or abbreviated this way: 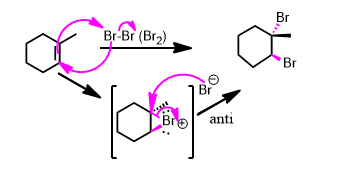 Each carbon of the former double bond (alkene) gained an electronegative element. Both carbons are oxidized. This is an oxidation reaction. But not one you can flashcard. If you’ve been shown the mechanism (lavender arrows above) you have to work the problem the same way. No flash cards until you’ve written it out from memory at least a few times.