How many Pericyclic Reactions are there? In terms of classes of reactions (as we always study) there are four.

The most common cycloaddition reactions are the 3+2 and of course, the 4+2 or Diels-Alder reaction. These are only the electronically thermal reactions. There are photochemical 2+2 reactions (requiring light) that create cyclobutanes. The 3+2 makes a five membered ring and the 4+2 makes a six-membered ring. What matters is the number of electrons involved in the reaction. Although pi bonds are trigonal planar, that does not mean that all the transition states are planar. 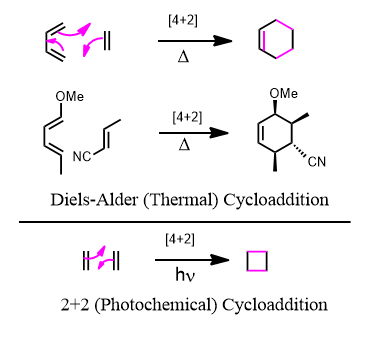 Also have a 6π transition state. 1,5-cyclohexenes form 1,3-cyclohexadienes in both thermal and photochemical conditions. The stereochemistry is the most relevant concept to gain understanding. Notice the following reaction would not be detectable ordinarily except for the change in structure and the the stereochemistry. Pericyclic reactions are stereospecific obeying the laws conservation of orbital symmetry. That is a subtopic of molecular orbital theory.

The Cope rearrangement has a versatile oxygen version, however, the oxygen is not in the pi system, per se, it is an alcohol on a suitable cope substrate (for examples see sigmatropic rearrangements)

The Claisen rearrangement is different in that it requires an oxygen atom in the system. A nitrogen atom involved, for example, would be an aza-Claisen.

Although these are written in the forward direction supposedly, all of these reactions are theoretically reversible. i.e. retro [4+2]; retro-Claisen etc.