The Unspoken Rules of Organic Chemistry

You may be studying or reading your textbook, and you have almost overload to absorb and attempt to prioritize random, disconnected facts in your mind. That’s studying. But imagine that while answering an organic question, (very open-ended questions) there is also a large number of unspoken rules that you imagine or that you’re not sure will ever be presented to you. Sometimes they will get mentioned or discovered, by you, but only when you are face-to-face with your first exam or after you’ve turned it in will it really feel like it is on.

These rules do not become apparent until someone explains to you what they are since they aren’t in the book and lecture sticks to data and concepts, not hypotheticals. The problem is that once you face an ambiguous situation while practicing problems or taking an exam, even small uncertainty stops many dead in their tracks. “Am I allowed to do this?”, “…and it’s okay to do that?” is something heard constantly and when students are told these things are or aren’t necessary, they pick up on it voraciously. The response is often flat-out incredulity or “they should’ve just said that then.”

No book devotes room to what you can’t or, more to the point, don’t need to worry about because such a book would be several volumes of useless information with plummeting demand. The things you need to know are there, the assumptions that newcomers make for whatever reason cannot be catalogued much less explained.

The biggest problem is the indoctrination, the familiarity you have gained concerning general chemistry. In fact, much of learning organic chemistry is unlearning the habits onto which you’ve made into your personal chemistry dogma.

Organic chemistry is a very different kind of endeavor and chemistry, utilizing fundamental ideas and concepts to their elastic limit.

In general chemistry, there are formulas, algebra-based calculations, rules to memorize (like solubility rules, polyatomic ion names), and dozens of definitions. In organic chemistry, it is very much the opposite.

You’ll use a handful of the simplest atoms, and apply precise principles to them which you learn gradually; almost as if by trial and error. People, it’s assumed, care only about what matters, results, but it’s hard to know if you’re even making progress. The strategy is plain and vigorous.

Pragmatic Beats the Abstract the Majority of the Time.

Using only a few powerful ideas which you will push the extremes, is how you will be successful. That may sound empty without context here. But it’s true and is a statement that confidence is important. Do not give up. More to the point, there is a series of proven steps that done consistently, pays off in this course and in your progress. It is no mystery. The problem is the benefits aren’t clear or visible; and motivation drags; it is difficult to measure progress even personally. Unless you are solving problems in the book and checking them against a solutions manual using these skills, you are not studying organic chemistry, not effectively.

What you are learning is a ton of unrelated facts with nothing to tie them together except their relation to atomic theory. At the least, know and learn those facts and definitions. Putting them together in a sensible manner takes time and practice and problem-solving like in calculus. But here is a list of things that people do want to know and are hard-pressed to find a straight answer to, in the book or elsewhere.

Therefore, the aim of this page is to remind you:

Alleviate as much fuzzy thinking as possible.  Do what you know for certain and be confident.

Target specific and difficult concepts, applied to gain practical ability. Starting a problem and working it to the end. If you understand the reading but can’t do problems, it is time to change something. If you’re awaiting complete understanding…don’t hold your breath and don’t waste time searching for it. No one is denying you knowledge, fake it until you make it if necessary (many do it that way anyway).

The big picture is not that complicated and is waiting if you practice. Keep doing (drawing and solving problems multiple times) until you know the right way to do it, whether you understand it perfectly or not is almost irrelevant if you can simply produce an acceptable answer. Either scenario means you’ll get the same grade, though retention of the material with little understanding is a different and less important problem. Your grade is permanent, but you will forget organic chemistry if you don’t continue to apply it or see the big picture.

At the beginning of the semester you are reminded about acids and bases starting with definitions. There is nothing at all trivial about this. Do understand we need to define these first. Without clear definitions, you cannot answer acid-base questions.

Organic chemistry is essentially acid-base chemistry (reactions between charged species are the vast majority (<90%) of what you’re doing). These reactions are therefore polar (opposing charges) unless it involves a mechanism between single-electron species (free-radicals) with unpaired electrons. These are important industrially and represent a small fraction of the total material (~3-4 reactions) you will learn this year. They’re covered later anyway.

The subject involves both definitions, but at a certain point, the words “acid” or “base” are used when an H+ ion is being transferred. Whenever the word acid or base is used unqualified or not specified otherwise, the book/speaker is likely referring to proton transfer. An acid has one or more easily donated hydrogen ions (H+).

The transfer of positively-charged hydrogen ions between species is often the first-step and the last step of many reactions you will learn as extremes in pH push reactions to transform by catalysis. In any case, organic compounds need to be neutral to isolate them from water this is known as a “work-up” or what’s done after the reaction has gone to completion. Work-up, means to neutralize it (then purify and characterize by spectroscopy).

The reactions you’re used to for acids and bases look like this from General Chemistry:

See the following reaction. This is a proton transfer from HCl to the pi-bond of the alkene which accepts it and by doing so breaks and forms a single bond. It is therefore, an example of a Brønsted Acid-Base reaction. But it’s more than that. The arrows below are an important part of the answer. You don’t need to draw arrows in the above inorganic reaction, but you can and should practice every time you study for this course after about the first month.

You can draw the same arrows as in the above reaction between water and hydrochloric acid. Please draw the arrows that get you the products. Always draw the arrows from the electron-rich

How many arrows are there? (Don’t violate the octet rule!)

Now pretend the reaction is going from the product side to the reactant side.

Draw the electron-movement arrows in the reaction between hydronium and chloride anion that makes the reactants.

Which side has the stronger acid/base pair? Which side is weaker? How can you tell? Do you need a pKa table to answer this?

When do Lewis Acids/Bases come in? And where did they go? 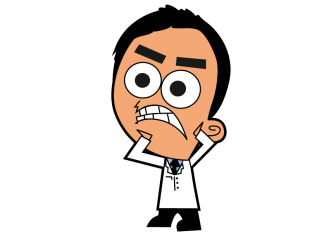 Nowhere. Lewis acids and bases are everywhere. It’s just that when an organic chemist mentions acids or bases, without specifying otherwise, they are almost certainly talking about the Brønsted definition. Unless it is specifically stated as “Lewis Acid” or Lewis Base” we’re talking proton transfer. Which is very important in this subject. Very important.

The Lewis Definition is a more succinct and robust definition and so it applies to all acid-base reactions, whether Brønsted or Arrhenius (an even older definition).  The definition must be congruent with the Brønsted definition and it is since we’re talking about charged species and how electrons flow. 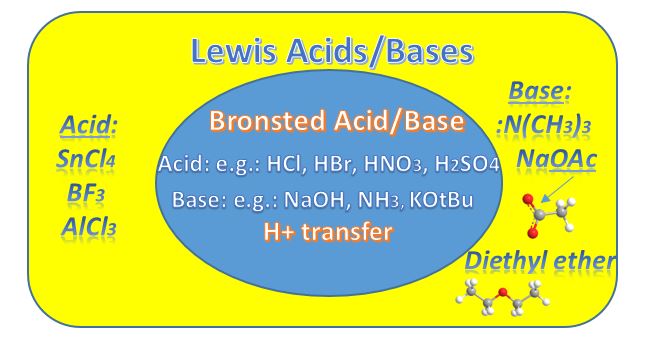 The terms Lewis acid (δ+) and Lewis base (δ-) will be replaced with two other new terms without warning. These new terms are presented as though they are novel or something different but they’ll be called an electrophile and nucleophile, respectively. However, it is specific to reactions involving organic (hydrocarbon-containing) compounds.

Actually, it’s just that from now on, a nucleophile (electron-source) is what we once called Lewis Bases (basicity is the tendency to make strong bonds). These have excess electron density in the form of a lone pair of e- or a (π) pi-bond; and particularly at carbon. And an electrophile is its (+) charged counterpart.

Unless stated explicitly, A Lewis base or Lewis acid will be specified as such each time. The point is that the terms nucleophile and electrophile largely replace these terms. It does reduce the confusion between multiple different acid/base definitions.

Nucleophiles and electrophiles are the species that represent the bulk of what you will be drawing, discussing and using in mechanisms. You will be drawing them all the time. The more you study by problem-solving the easier it will be to take exams which is nothing but an hour to two hours of drawing. But it’s fun. Seriously.

Accordingly, an electrophile is a Lewis Acid. It is electron-deficient, either totally or in part (polar covalent), and like a hole or sink, accepts a pair of electrons to form a bond to a nucleophile is involved…and, oh yes, at least one species will be an organic compound.

These are odd terms to get familiar with at the beginning. This is because their names are about what they want, not about what they are and confusing the two at first is easy. It’s about bond formation between many different potential atoms, not just hydrogen ion transfer.

Electrons bearing negative-charge makes the flow of the curved arrows matter. You will draw an arrow from the negative charge to positive charge, without exception. If you can identify which is which and do at least that, you’ve started to answer the question.

Reaction mechanisms are all about putting these elementary steps together. The species are defined by what they do, it turns out, not because of what they want. So, they want to be stable and reach lower-energy states.

Why does the concept of stability have different meanings when talked about in lecture? Why does stability seem to mean different things depending on either the context, the example, or who you’re talking to?

This has both a short answer and very protracted and convoluted answer.

The short answer is that stability has two forms. There is kinetic stability and then there is thermodynamic stability.